In December 2021 Eskom announced an auction process to unlock and make some of its land available to private investors for renewable energy generation, aiming to ultimately promote investments in further electricity generation capacity and infrastructure. 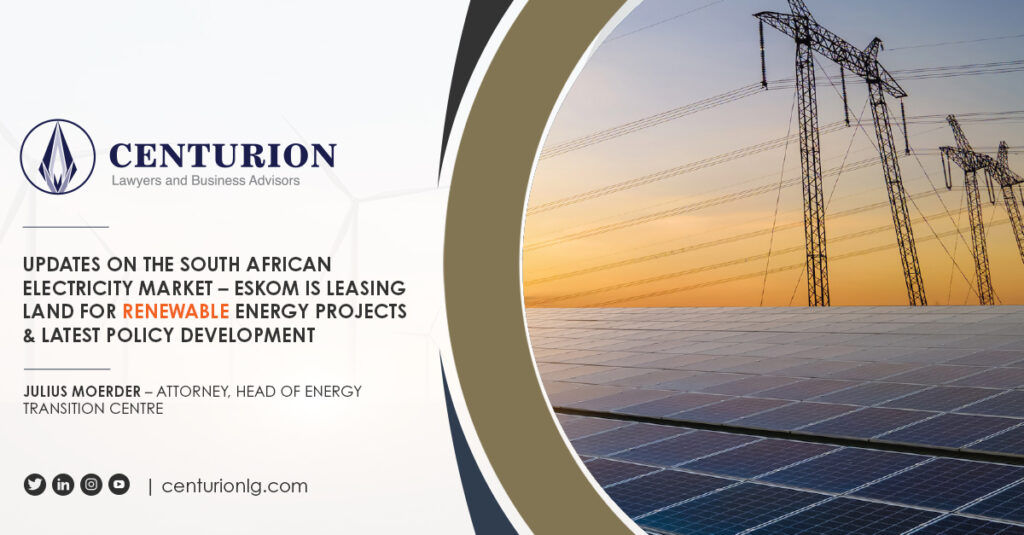 In December 2021 Eskom announced an auction process to unlock and make some of its land available to private investors for renewable energy generation, aiming to ultimately promote investments in further electricity generation capacity and infrastructure.

Following the announcement, Eskom has now issued a request for proposals (RFP) to lease parcels of its land in Mpumalanga to IPPs to create renewable energy projects (bid window from 8 – 29 April 2022). The commercial tender process will auction the land on site or near existing coal-fired power stations for the development of renewable energy projects. This entails proximity to transmission lines and allows Eskom to provide connection up to the nearest network connection point. The criteria for the bidding will favour generators for size and speed of delivery, in other words the fastest delivery of additional generation capacity to the grid.

Those criteria clearly make sense as the latest wave of load shedding shows that relief to the constraints on the power system is much needed. Consequently, Eskom’s CEO André De Ruyter said the initiative is a “trial”, and there is scope for the initiative to be expanded, if desired results are being delivered. As it stands now, the lease period will be 20 years with a maximum generation capacity of 100 MW for each project. The capped generation capacity means that plants can operate without a licence, and it allows generators to wheel electricity through the transmission grid as provided by the latest Amendment to the Electricity Regulation Act in 2021.

De Ruyter further said, that Eskom is targeting 1000 MW of power, but ultimately it could go as high as 4000 MW to 5000 MW of renewable energy capacity from the country’s coal belt, where coal-fired power stations will eventually be retired.

Furthermore, the Ministry of Forestry, Fisheries and the Environment invited public comment on the intention to adopt standard for the “Standard for the Development of Power Lines and Substations”. Therein, the Ministry proposes the exclusion of certain identified activities for the realization of the development or expansion of powerline and substation infrastructure from the requirement to obtain environmental authorization.

As Eskom and the transmission company need to build between 8,000 and 10,000 km of transition lines to connect the users to the electricity grid, such exclusion from the requirement to obtain environmental authorisation is expected to accelerate the rollout of much-needed grid capacity.

Although Eskom has already connected 91 projects of 7000 MW to the grid as part of the Renewable Energy Independent Power Producer Procurement program (REIPPP), there is a continuous shortfall in electricity supply and it is evident that further measures are inevitable.

The recent developments should therefore be highly welcomed as it shows that Eskom is working on building additional generation capacity from third-party electricity generators as well as the Government’s commitment in advancing its energy transition efforts.