On 1 January 2021, free trading officially commenced under the African Continental Free Trade Area (AfCFTA). This was a much-celebrated milestone not only for African unity but for African trade. 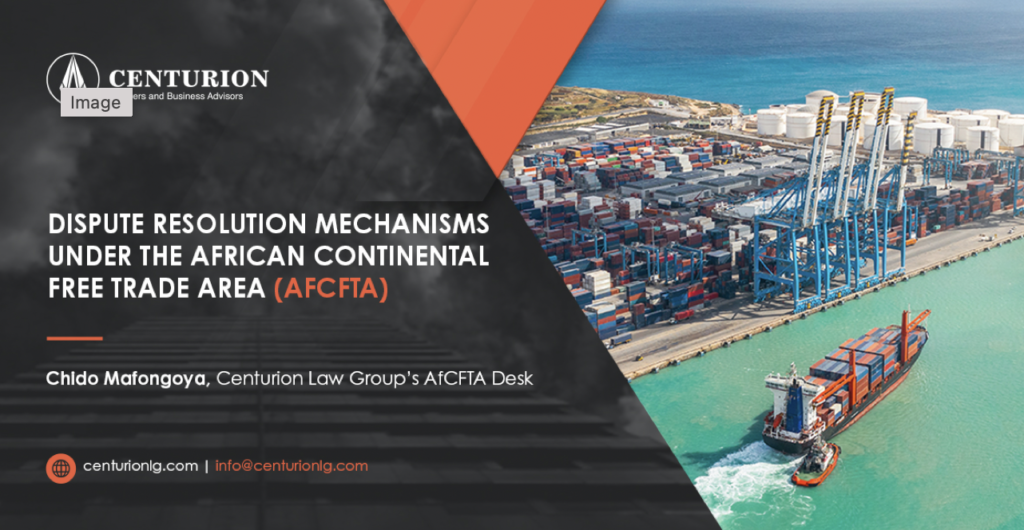 On 1 January 2021, free trading officially commenced under the African Continental Free Trade Area (AfCFTA). This was a much-celebrated milestone not only for African unity but for African trade. The aim of the AfCFTA is to create a single continental market for goods and services together with free movement of business persons and investments paving a way for the establishment of a continental customs union. [1] With the commencement of intra-African trade, it is expected that there will be a significant boast in intra African trade and foreign direct investments. As such it is inevitable that disputes that will arise amongst trading partners and/ or foreign investors. This article with give an overview of the dispute resolution mechanisms provided for under the AfCFTA and its Protocols.

The mechanisms for dispute resolution concerning the rights and obligations of State Parties are found under Article 4(f) of the AfCFTA Agreement.[2]The mechanisms for settlement of disputes under the Agreement are governed by the Protocol on Rules and Procedures of the Settlement of Disputes (the Protocol) which provides for State-to-State dispute mechanisms to resolve disputes.[3] This Protocol was adopted and signed when the AfCFTA was officially launched in Kigali on 21 March 2018.  The Protocol states that dispute settlement to be “a central element in providing security and predictability to the regional trading system”.[4]The main aim of the Protocol is to ensure that the disputes that arise under the AfCFTA are resolved in a manner that is transparent, accountable, fair, predictable, and consistent with the provisions and principles of the Agreement.[5]

The dispute resolution mechanisms provided for under the AfCFTA mirror the dispute resolution framework of the World Trade Organization (WTO) in that just as the WTO has the Dispute Settlement Understanding (DSU) the Protocol also establishes a Dispute Settlement Body (DSB).[6]The DSB is made up of representatives of State Parties, and outlines the framework for the resolution of disputes under the agreement and its other Protocols.[7] The DSB’s mandate is to interpret and apply all AfCFTA legal instruments together with their Protocols, Annexes, and Appendices and govern State Parties’ rights and obligations under the same. However, it must be noted that the DSB will only hear disputes between State Parties to the AfCFTA Agreement and not between individuals or private parties. Thus, private parties can only bring their cases to the DSB through their respective States and not as individuals. The AfCFTA Agreement being an agreement of a single undertaking means that it can only has jurisdiction to handle disputes relating to the application or interpretation of any of AfCFTA legal instruments only and not any other issues.[8] The dispute resolution mechanism also establishes the Appellate Body (AB) which is be a permanent appeal body composed of seven members whose mandate is to adjudicate appeals against Panel reports. [9]

We shall now discuss the four methods of disputes settlement mechanisms spelt out in the Protocol, as follows:

This method is a mandatory first step and occurs when a State Party has declared a dispute against another State Party, the first recourse is hold confidential consultations to find an amicable solution.[10] It is requirement for the aggrieved party whom would have requested the consultation to notify the DSB in writing the reasons for the complaint and to spell out its grievances by specifying the violations.[11]Just like any other dispute resolution process there are also specific timelines that parties should adhere to when a dispute is declared. For instance, a party (respondent) has ten days within which to prepare its response after receiving the request for consultation and must then enter into consultations within 30 days except with the exception of perishable food.[12]

Under this dispute resolution mechanism there is rule of reverse consensus under Article 19(4) of the Agreement which basically sets out that certain decisions by the DSB such as the decision to adopt a Panel Report must be approved unless there is consensus by the DSB not to do so.[13] Practically this means that the DSB has the power to adopt the Report unless there is consensus not to adopt it, in instances where a party votes against its adoption. Under such circumstances the decisions of the DSB will be final and binding.

This dispute resolution mechanism is found under Article 8 of the Protocol. Under this method an outside, independent person unrelated to the parties of a dispute assists the parties to find a mutual agreement.[14] The proceedings under this method are strictly confidential and do not prejudice the rights of the State parties in any manner whatsoever in any proceedings in the future. Under this method State Parties may commence and terminate these proceedings as long as it is not prior to a request for consultations.  Nevertheless, such a request is made after a request for consultations, the aggrieved party is required to wait for the Good Offices, Conciliation and Mediation to run its 60 days course prior to requesting for the creation of a panel, except in cases where the parties jointly consider that the Good Offices, Conciliation and Mediation has failed to resolve the dispute.[15]

This method involves the participation of two bodies namely the Panel and the Appellate Body. Once a dispute arises the dispute is resolved by the delegation of adjudicatory powers to an independent panel composing of three persons established by the Body or in instances where parties are displeased with the Panel’s findings, to a further panel of three persons selected out of a pool of seven persons who form the Appellate Body.[16]  It is important to note that the establishment of these bodies is triggered when an actual dispute arises and both bodies whilst carrying out their mandate are obliged to interpret the agreement in line with the customary rules of interpretation of public international law, including the Vienna Convention on the Law of Treaties, 1969.[17] This method is only available in instances where State Parties have failed to settle the dispute during consultations.

Lastly, under Article 27(1) of the Protocol parties to a dispute may have recourse to arbitration. Under this method parties are at liberty to agree on the procedures to be used in the arbitration proceedings. The Protocols provide that parties may elect arbitration proceedings in accordance with any agreements as a substitute to resolution by the DSB. [18]Parties must however notify the DSB of the agreements to arbitrate and the decision by the arbitrator or the arbitral tribunal shall be binding on the parties and shall also be notified to the DSB for enforcement purposes.[19] It is important to note that once a party elects the arbitration method it precludes itself from simultaneously using the Panel to settle disputes. As such, the Panel will only be resorted to in the event that parties cannot co-operate.

Article 23 of the DS Protocol provides for the remedies available where the Panel or the AB concludes that a measure is inconsistent with the Agreement, it states that it shall recommend that the State Party concerned bring the measure into conformity with the Agreement.[20] In addition to its recommendations, the Panel or the AB may suggest ways in which the State Party concerned could implement the recommendations.[21] State Parties are required to fully implement the recommendations and rulings of the DSB. [22]In terms of Article 25 of the Protocol where accepted recommendations and rulings of the DSB are not implemented by a party within a reasonable period of time, the guilty party may be ordered to pay compensation, or may be suspended of concessions or other obligations that are temporary in nature.[23]

In conclusion, the Protocol is a progressive step in setting out a sound legal framework for the dispute resolution mechanisms under the AfCFTA. Dispute resolution mechanisms are key to not only an effective operation of a free trade area but to an effective investment framework. The fact that the framework mirrors that of the WTO provides certainty and confidence especially with foreign investors as the mechanisms provided under the WTO have been tried and tested thus winning the confidence of investors and traders. It is important for a State Party to a dispute under the agreement to pay attention to a number of considerations such as cost-implication, time, as well as the finality associated with each process before selecting a method for dispute resolution.