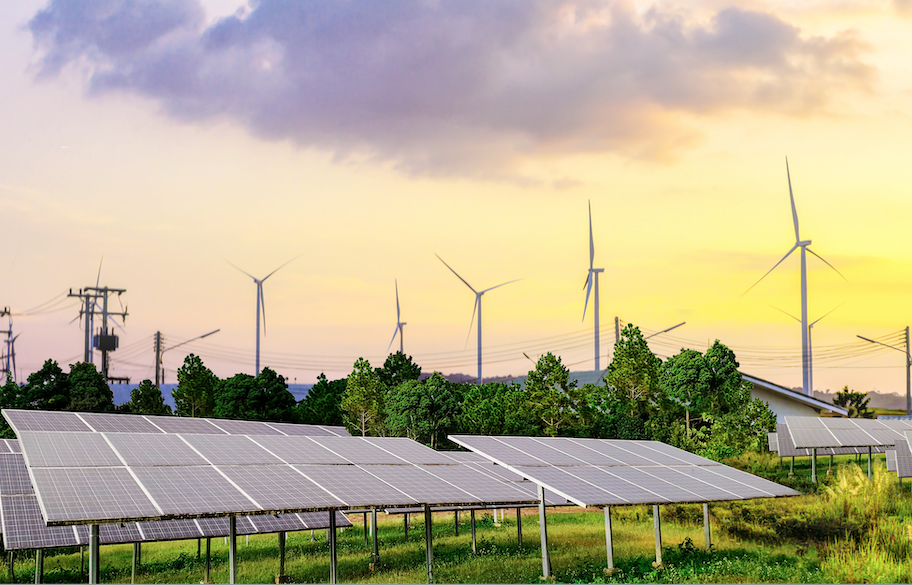 In 2021, nearly 290 GW of new renewable power was installed, a 3% increase over 2020’s already exceptional growth. In 2021, solar PV accounted for over half of all renewable power expansion, followed by wind and hydropower. Between 2020 and 2026, renewable electricity capacity is expected to grow by over 60%, to over 4800 GW. This is equivalent to the current global fossil fuel and nuclear power capacity. China will continue to lead the world in renewable energy capacity growth over the next five years, with a 43% share. China’s commitment to carbon neutrality by 2060 has led to new nearer-term targets, such as 1200 GW of total wind and solar PV capacity by 2030. Europe, the United States, and India will follow China in renewable energy capacity growth. Only these four markets account for 80 percent of global renewable capacity expansion. The information in this article is mostly drawn from the IEA Renewable 2021 — Analysis and forecast to 2026.

Energy growth in some countries

Between 2021 and 2026, China’s renewable energy capacity is expected to grow by nearly 800 GW. The Chinese forecast is nearly 70% higher than last year’s due to new proposed renewable energy targets. By 2030, China wants to generate 40% of its electricity from non-fossil sources.  Two-thirds of China’s renewable capacity expansion is expected to come from utility-scale solar PV and wind power. Centrally set renewable portfolio standards should help China’s provinces reach 40% non-fossil electricity (including nuclear power) by 2030. Growing market participation should improve compensation stability and reduce curtailment issues through cost-reflective dispatching and cross-provincial electricity trading. Corporate PPAs or bilateral contracts between large consumers and developers are also options. A stable compensation system and increased access to affordable financing could help accelerate residential and commercial/industrial PV growth by 15%.

The United States is expected to install approximately 200 GW of renewable energy capacity between 2021 and 2026, making it the third largest market after China and Europe. State targets, federal tax incentives, and the growing economic appeal of business renewable electricity purchases are driving the expansion. More than three-quarters of the increase comes from solar PV, with the rest from wind power.

If federal tax incentives are extended and monetised using a direct-pay scheme rather than solely as tax equity, the accelerated case may see US renewable capacity grow by approximately 275 GW between 2021 and 2026, a 26% increase. Both potential drivers rely on the ultimate budget reconciliation text. Increased grid capacity from upgraded networks would also result in higher growth. To fulfill the declared federal renewable energy targets for 2030, state policies must match federal ambitions. Only 21 states have carbon-free electricity goals, with Rhode Island being the only one planning to do so by 2035.

Renewable energy is spreading rapidly in India, but meeting targets will involve overcoming persistent challenges. Between 2021 and 2026, India is expected to install 121 GW of renewable energy capacity, an 86 percent increase over current capacity, making it the world’s third-largest growing market after China and the United States.The vast majority of this deployment 74% is accounted for by solar PV, with onshore wind 16% and hydropower trailing closely behind. After a drop in 2020, several policy improvements have offset growing hurdles, so India’s outlook is projected to be revised upward. Unfortunately, the financial health of India’s distribution companies (DISCOMs) remains a major concern, delaying the signing of PPAs with auction winners and putting some projects at risk of delay or cancellation. Due to limited mobility and supply chain concerns caused by COVID-19, renewable. In order to reach its ambitious renewable capacity target for 2022 (175 GW), India has contracted unprecedented amounts of solar and wind capacity.

Between 2021 and 2026, Germany’s renewable energy capacity is predicted to rise by over 40% (57 GW), led by solar PV, onshore wind, offshore wind, and biofuels. Policies aimed at achieving long-term climate goals fuels this growth. The majority of utility-scale renewables are driven by government auctions, whereas distributed PV is supported by feed-in tariffs and self-consumption with surplus energy reimbursed.

The government agreed to increase the amount of solar PV capacity auctioned in 2022 from 1.9 GW to 6 GW and the amount of wind capacity auctioned from 2.9 GW to 4 GW. The benefits of new regulations to expedite onshore wind licences under the new Renewable Energy Sources Act (EEG 2021), which came into effect in January 2021, is also boosting the optimistic forecast.

Between 2021 and 2026, France’s total installed renewable energy capacity is predicted to grow by 55% (32 GW). Solar PV and wind power will account for nearly all of the expansion, with yearly capacity additions of 2.7 and 2.4 GW, respectively. Onshore wind is expected to account for three-quarters of new installations, with utility and commercial-scale PV remaining dominant. The 480 MW Saint-Nazaire project will be completed in 2022, a decade after it was granted in a competitive bidding procedure in 2012. In addition to seven significant projects planned to come online by the end of 2026, offshore capacity is forecast to reach 3.7 GW by the end of 2026. However, due to prolonged lawsuits, projects have experienced severe delays and the government has renegotiated contracts to avoid the creation of windfall profits. Also in April 2021, France issued a request for proposals (RFP) for a floating offshore wind project with a potential capacity of up to 270 megawatts (MW).

Renewable capacity in the United Kingdom is predicted to increase by 50% (26 GW) between 2021 and 2026. Offshore wind accounts for more than half of all renewable energy growth, making the United Kingdom the second fastest-growing offshore wind sector in the world, behind China. In 2019, the United Kingdom set a legally binding net zero GHG emissions target for 2050, with an interim goal of 78 percent emissions reductions relative to 1990 levels by 2035. At the moment, the renewable energy capacity objective is limited to offshore wind, with 40 GW scheduled for installation by 2030, quadrupling the present installed capacity of 10 GW. CfD auctions continue to be the primary driver of expansion, with nearly 11 GW of renewable capacity awarded in three auction rounds held in 2015, 2017 and 2019, with 10 GW of that capacity allocated to offshore wind. The fourth CfD round will include a record 12 GW of capacity, 5 GW of which will be given to onshore wind and photovoltaic projects, resulting in a rebound in their additions between 2023 and 2025.

The primary obstacles are lengthy permitting processes and a lack of grid capacity. Current onshore wind regulations necessitate extensive adjustments to municipal zoning plans, and in England, individuals can easily reject projects even though the bulk of the local community supports them. Utility-scale photovoltaic systems require additional financial support due to their higher generation costs than wind.

South Africa is expected to add more than 5 GW of capacity by the end of 2026, accounting for about 30 percent of all non-hydroelectric capacity additions in the area during that period. In 2021, the country’s annual additions are predicted to remain constant as a result of the commissioning of projects that were awarded in 2015. (REIPPP Round 4). Eskom’s financial condition and system limits continue to stifle growth, as money is earmarked for network improvements and maintenance rather than grid expansion, aggravating the network’s already low availability (Eskom, 2021). Between 2021 and 2026, policy actions that facilitate public and private procurement will be the driving force behind the growth. Government auctions and municipal purchases make it possible to add utility-scale wind and solar PV to existing systems. At COP26, the South African government announced a revised nationally determined commitment to enhance renewables by repurposing coal facilities that are slated to be decommissioned within the next 15 years, as part of its efforts to combat climate change. A total of USD 8.5 billion in foreign concessional finance would be made available over the next three to five years, enabling it to achieve its goals.

Kenya’s renewable energy capacity is expected to grow by more than 75% between 2021 and 2026, adding more than 1.7 GW. Long-term power purchase agreements (PPAs) negotiated under the national feed-in tariff policy have made it possible to build roughly 1.2 GW of combined wind and solar PV capacity. As a result of the cancellation of previously announced projects, the projection has been revised downward slightly from last year. Low investor confidence is a deterrent to increased investment in the sector. Renegotiations of power purchase agreements (PPAs) and lengthy interconnection periods have resulted in longer project durations.

Ethiopia’s renewable energy capacity will have more than doubled by 2026, with the country adding approximately 6 GW of new capacity during this period of rapid growth. The Grand Ethiopian Renaissance Dam and the Genale-Dawa IV hydropower plants accounted for more than 80% of the total capacity additions. Capacity additions have been fueled in the past by foreign investment, tenders and bilateral power purchase agreements with the government-owned Ethiopian Electric Power Company, and this trend is expected to continue in the projected period. As a result of auctions held in 2019 and private investment, solar PV additions are likely to increase, while international concessional funding is expected to assist fuel wind development, with two big projects being partially supported by China and Denmark.

Nigeria’s electricity grid uses a combination of hydropower and solar PV installations. According to government initiatives, creating connected mini-grids for schools and colleges, as well as the development of rural off-grid PV, are important components of the economic recovery from COVID-19. Utility-scale solar PV is supported by private investment in the form of public-private partnerships and power purchase agreements (PPAs) with utilities, which account for more than 30% of the forecast. However, policy uncertainty has hampered further development, as previously awarded PPAs have been subsequently renegotiated, resulting in a large number of projects not being completed.

Tanzania’s renewable capacity has increased by more than 2.5 GW, primarily as a result of the commissioning of the 2.1 GW Julius Nyerere hydroelectric project. Concessional finance and constructing developments along existing transmission lines help to alleviate worries about connectivity for new solar installations. New regulations allow independent power producers to establish power purchase agreements (PPAs) in areas that are not currently served by the national grid, resulting in an increase in off-grid capacity during the forecast period. Tanzania will add 100 MW of new wind capacity in the predicted period after receiving its first wind farm in 2020, which was made possible by negotiations with the government on land rights and power purchase agreements. Uncertainty in policy and a lack of infrastructure are obstacles to economic development. Auctions that had been previously scheduled have been canceled, and the vast bulk of the country is without access to the national grid.