The inefficacy of the regime for repatriating funds in Nigeria continues to stick out like a sore thumb in the country’s foreign investment ecosystem. Without a doubt, the goal of every investor in any economic setup is to receive a return on investment(s). For foreign investors, an added incentive of investing or doing business, especially in a country like Nigeria with significant opportunities, is the ability to access, and repatriate, funds, without any form of difficulty. 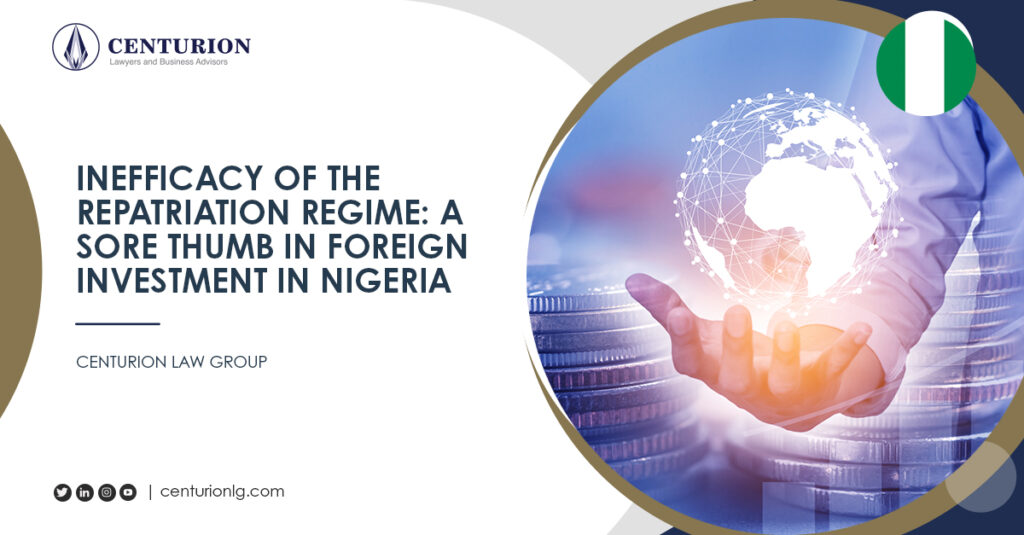 The inefficacy of the regime for repatriating funds in Nigeria continues to stick out like a sore thumb in the country’s foreign investment ecosystem. Without a doubt, the goal of every investor in any economic setup is to receive a return on investment(s). For foreign investors, an added incentive of investing or doing business, especially in a country like Nigeria with significant opportunities, is the ability to access, and repatriate, funds, without any form of difficulty. Unfortunately, in recent times, this has become increasingly difficult to achieve as the nation faces dwindling foreign exchange earnings and FDI investment. While Nigeria does have a liberal ‘free entry, free exit’ approach to the movement of foreign investment funds into and out of its economy as enshrined in its relevant laws on the subject, what obtains in reality is much different as the repatriation of foreign investment is not a smooth ride. At present, one sector suffering acutely from this problem is the aviation sector.

The year 2022 has seen airlines’ inability to access their funds become a regular occurrence in Nigeria as several airlines are either forced to hike their fees (to accommodate losses that may occur from devaluation of the naira or accessing foreign exchange at black market rates), suspend flights or reduce the number of flights into Nigeria to cope with the financial strain that long delays in profit repatriation has put on their businesses. Recently, while speaking on this problem, the Regional Vice President of the International Air Transport Association (IATA), the top global trade association of airlines, disclosed that about 20 countries worldwide had blocked airline funds totalling about $1 billion. Of this amount, he stated that more than $700 million was tied up in 11 African countries with Nigeria accounting for the largest amount withheld by any African nation.[1] The IATA further criticised Nigeria’s failure to allow international airlines repatriate their profits to the tune of $464million (N199.2billion) in July.[2]

The Vanguard Newspaper also reported that at the end of July, the amount increased to $600m, and was estimated to reach $1billion by the end of year if the issue is left unchecked.[3] In the same month, United Arab Emirates (UAE) flag carrier, Emirates reduced the number of its weekly flights from Dubai to Lagos from eleven (11) to seven (7) due to inability to repatriate about $85 million of its profits from Nigeria, with plans to completely ban all flights to and from Dubai/Nigeria effective September 1, 2022[4]. British Airways also reportedly reduced frequent flights to Nigeria while also hiking its prices for the flights that remained operational.[5] It should be noted that while these airlines faced difficulty in repatriating their funds out of Nigeria, they still had to inflow foreign exchange funds to facilitate their operations in the country. Although the Central Bank of Nigeria has reportedly managed to release some of the blocked funds through a special FX intervention[6], it is evident that this problem needs to be proactively addressed to prevent incidences like this occurring in the future.

The NIPC is the apex regulator for foreign investments in Nigeria. The NIPCA allows ownership of investment by any national or foreign investor in any enterprise except those activities listed in the negative list i.e. production of arms, ammunition, production of and dealing in narcotic drugs and psychotropic substances, production of military and para-military wears and accoutrement, including those of the Police and the Customs, Immigration and Prison Services; and such other items as the Federal Executive Council may, from time to time determine.[7]

The Act also provides that a foreign investor in an enterprise, to which the Act applies, shall be guaranteed unconditional transferability of funds through an authorized dealer[8] in a freely convertible currency of; (a) dividends or profits (net of taxes) attributable to the investment; (b) payments in respect of loan servicing where a foreign loan has been obtained; and (c) the remittances of proceeds (net of all taxes), and other obligations in the case of sale or liquidation of the enterprise or any interest attributable to the investment.[9]

Furthermore, foreign investors are protected against nationalization and expropriation.[10] Where in the national interest, the Federal Government acquires any enterprise, the Act provides that there must be; payment of fair and adequate compensation and , where necessary, access to the courts for the determination of the investor’s interest or right and/or the amount of compensation to which he is entitled. Such compensation must be paid without undue delay. A foreign investor is also granted the option of recourse to international arbitration for the settlement of disputes.

In addition to the above provisions, to further encourage foreign participation in Nigerian businesses, the NIPC, in collaboration with the Federal Inland Revenue Service (FIRS), issued a Compendium of Investment Incentives in Nigeria published on October 31, 2017. As stated in the preface of the Compendium, it is a compilation of the fiscal incentives in Nigerian tax laws and sector-wide fiscal concessions that have been duly approved by the Federal Government and are supported by legal instruments.

The FEMMA is the primary legislation for foreign exchange transactions in Nigeria.[11] The FEMMA provides that any person may invest in any enterprise or security with foreign currency or capital imported through an authorized dealer[12] either by telegraphic transfer, cheques or other negotiable instruments and converted into naira in the market in accordance with the provisions of the Act.[13] The mechanism through which this is done is a Certificate of Capital Importation (CCI), a certificate issued to a foreign investor as evidence of its foreign capital investment whether as equity or debt, cash or goods/equipment. The authorised dealer, through which foreign currency or capital is imported, is mandated to issue an electronic CCI within 24 hours of the importation and to make necessary returns to the CBN within 48 hours.[14]

Like the NIPCA, the FEMMA also guarantees unconditional transferability of funds through an authorised dealer in freely convertible currency relating to dividends and profits, payments in respect of loan servicing, and remittances of the proceeds of sale or liquidation of the enterprise or any interest accruing to the investment made.[15] Essentially, this means that a foreign investor is permitted to bring in capital into the country to finance his investment and is entitled to repatriate back 100% of the profits net of taxes, to his/her home country at autonomous market rates without any hindrance.

The CBN is the apex regulatory body for banks and financial institutions as well as the regulatory body responsible for the management of monetary, foreign exchange and currency reserve of Nigeria[16]. The CBN introduced electronic CCIs, also known as E-CCI(s), in September 2017, prior to which time, CCIs were issued in hardcopy. E-CCIs are issued, managed, and monitored via an electronic platform administered by the CBN, to which the commercial banks and investors have access.[17]

The ISA empowers the Securities and Exchange Commission (SEC) to keep and maintain a register of foreign portfolio investments.[18]

The Act establishes NOTAP , the body responsible for registering contracts/agreements relating to transfer and acquisition of foreign technology in Nigeria.[19]

As evinced by the above regulatory provisions, Nigeria has laws, regulations and policies in place to permit and, indeed, facilitate, unhindered conversion and movement of profits by foreign investors. However, as is the situation with many other laws in Nigeria, problems are encountered at the point of implementation such that the reality of the nation’s foreign exchange regime becomes vastly different to its theoretical operation. While inflow of foreign capital is met with some ease where all necessary requirements have been fulfilled, repatriation poses quite the challenge for investors, and delays often occur usually due to a number of possible factors. In present times, factors that seem to fetter the ease of repatriation include the global decrease in crude oil prices, the devaluation of the naira and certain forex policies enacted by the CBN in an effort to strengthen the naira.

It is evident from the above listed laws on repatriation of capital and profits in Nigeria that the Nigerian government is committed to encouraging foreign investment in the Nigerian economy. The generous incentives and investor protections attest to this. However, it is not enough merely to have these laws on the books. The government needs to take more active steps towards ensuring that there are mechanisms in place to ensure that these laws are effectively implemented and investors are able to repatriate their profits without undue difficulty.

Narrowing it down to the aviation sector, the IATA’s constant sounding of the alarm regarding the nation’s failure to restore timely repatriation of funds by foreign airline operators will hurt Nigeria’s air connectivity and economic opportunities. This is shown clearly by the withdrawal/reduced operations of several airlines in the country. It is unreasonable to expect that an airline will continue operations to a country from which it is unable to realise the revenues from sales of air tickets. Already, citizens are considering flying from neighbouring countries such as Ghana and Benin Republic to avoiding paying high ticket prices. Loss of air connectivity will no doubt have a negative impact on the Nigerian economy, harm investor confidence and affect people’s livelihoods.