On July 19, 2022, the Nigerian government made an official announcement confirming the complete transformation of the Nigerian National Petroleum Corporation (NNPC) into NNPC Limited (NNPCL). 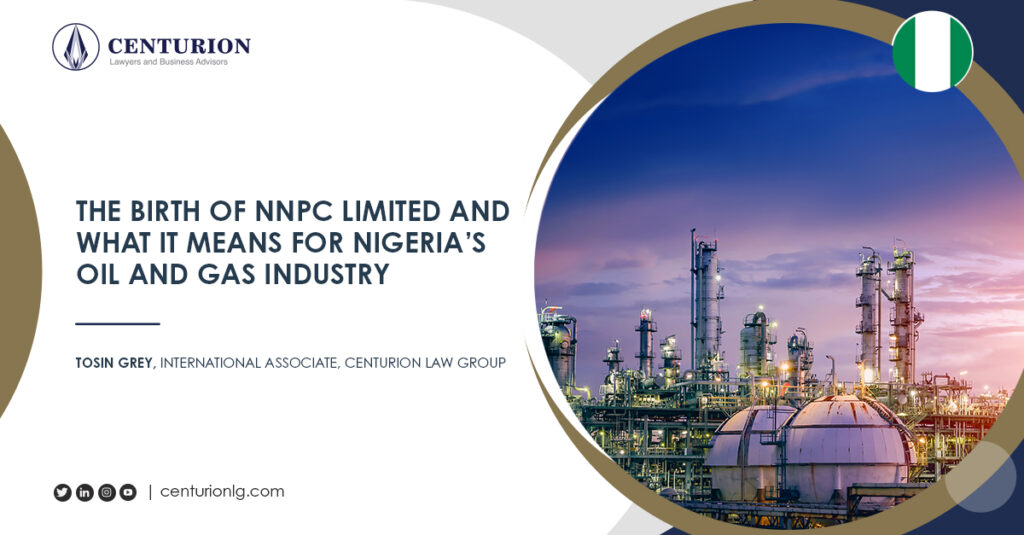 On July 19, 2022, the Nigerian government made an official announcement confirming the complete transformation of the Nigerian National Petroleum Corporation (NNPC) into NNPC Limited (NNPCL). NNPCL is a brainchild of the Nigerian Petroleum Industry Act (PIA) which was passed into law in August 2021[1]. The NNPC was a state-owned and controlled corporation licensed to operate in the country’s petroleum industry which utilized the country’s fossil fuel and natural gas reserves by partnering with foreign oil companies. The new NNPCL, while still wholly owned by the State, is intended to operate as a fully commercial venture without government funding (besides the initial capitalization) or control and is expected to be regulated by the Companies and Allied Matters Act 2020.[2] In addition, NNPCL will now declare dividends to shareholders while retaining 20 percent of profits to grow its business.[3] NNPCL is expected to sometime in the future[4], invite the public to purchase shares to raise equity capital for the business of the company especially as it would no longer have access to state funds in line with the objective to commercialise the corporation.

It is also expected that NNPCL would eventually achieve trading status on global stock exchange markets like its counterparts, including Saudi Arabia’s Arabian American Oil Company (ARAMCO) Brazil’s Petróleo Brasileiro (Petrobras) to name a few. NNPCL will also no longer be concerned with issues of petrol pricing and subsidy, neither will it continue to remit funds into the Federation Accounts Allocation Committee (FAAC) such that the company funds can be used to further its business rather than issuing national payouts.

Yet, while the introduction of the NNPCL promises to be advantageous to the country’s energy industry, realistically speaking, there are certain challenges that need to be promptly and properly addressed for the new NNPCL to function effectively and achieve its objectives. To mention a few, continued government influence, NNPC’s transfer of liabilities to NNPCL, corporate governance issues are at the top of concerns.

Furthermore, the PIA incorporates an automatic transfer of all existing employees under the former NNPC into the new NNPCL with no vetting procedure for these employees in place. Section 57(1) under discuss states as follows:

Upon incorporation of NNPC Limited under section 53 of this Act, employees of NNPC and its subsidiaries shall be deemed to be employees of NNPC Limited on terms and conditions not less favourable than that enjoyed prior to the transfer of service and shall be deemed to be service for employment-related entitlements as specified under any applicable law.

This means that NNPCL will have substantially the same employees as the former NNPC which is tantamount to pouring new wine into old wineskins. It is understandable that the lawmakers were wary of leaving the employees of the former NNPC redundant upon the transition. However, the automatic retention of former NNPC staff is counterproductive because NNPCL essentially inherits its all of its predecessor’s employees, some of whom are controversially unqualified and redundant thereby stunting its growth potential.

The PIA goes further to provide for the appointment of a Board of the NNPCL whose appointment shall be done by the President of the country.[7] Another interesting provision is Section 58(2)(r) which provides that the Board should among others consist of ‘six (6) non-executive members with at least 15 years post-qualification cognate experience in petroleum or any other relevant sector of the economy, one from each geopolitical zone’ effectively politicizing the appointment of these individuals to the board as opposed to appointments strictly based on merit. Perhaps realizing that the previous provisions on appointment to the new NNPCL Board may be inconsistent with the new NNPCLs  ‘no government influence’ mandate, the lawmakers included a proviso in Section 58(5) stating that the provisions of the section would only apply where NNPCL remains wholly owned by the government after which the composition would then be determined by the new shareholders after the sale of shares to the public. This may appear to resolve the evident problem, however, the shares of the new NNPCL will not be made available to the public until an unknown time in the future which is not specifically stipulated under the Act.

Although NNPCL’s Chief Executive Officer intimated that the company would be ready for an Initial Public Offering (IPO) mid 2023, this is not set in stone as factors such as governmental and bureaucratic delays in organization may extend this timeline. Afterall, it did take almost a year to fully effect the provision to incorporate the new NNPCL as opposed to the 6 months timeline stipulated in the PIA. In any case, even if there are no delays in the estimated timeline for the sale of shares to the public, the IPO process, appointment of new Board members and other corporate procedure could take months at the earliest to effect. This means that the NNPCL would still be run by old NNPC officials pending formalization of all corporate procedures thus making the new NNPCL ‘government’ run for at least the foreseeable future. Effectively, this results in NNPCL failing its first mandate as a fully commercialized company i.e to be free of government influence and control.

Another concern is the provision of the PIA which transfers liabilities from the old NNPC to the new NNPCL. This is provided for under Section 54(1):

Further provisions of the section discuss issues of assets that would remain with NNPC or the government, actions that may be brought against NNPCL, NNPC, or the government, etc. However, the mechanism for the determination of which assets and liabilities would pass on to NNPCL and which would be dealt with by the old NNPC/Government are not stipulated in the PIA, leaving much to the discretion of the Minister for Petroleum and Finance with some assistance from the Attorney General of the Federation in peculiar circumstances. Section 54(2) states as follows:

A spruce way to deal with the inherited assets and liabilities from NNPC would have been to make provision for the creation of an SPV to specifically deal with these issues, especially with respect to the liabilities rather than burden the NNPCL with the old NNPC’s mammoth liabilities in its formative years when it should be focused on its growth. It is hoped that the Ministers would devise suitable mechanisms to deal with these in the most efficient and least invasive way possible.

As a corporate entity, NNPCL will be governed by Nigeria’s corporate laws as enshrined in the Companies and Allied Matters Act (CAMA). Of particular importance are some of the corporate governance principles contained in CAMA which are there to ensure international best practice in the day-to-day operations of Nigerian corporations including provisions on separations of the role of Chairman and Chief Executive Officer, appointment of Independent Directors, limitation of multiple directorships, disqualification from appointment as a director, disclosure provisions among others. It is expected that upon the IPO of NNPCL, it would become a Public Limited Liability Company (Plc) and thereby subject to more stringent corporate governance and disclosure policies even beyond the statutory requirements under CAMA[8].

Some of the corporate governance sections under CAMA include provisions which state that every public company must have at least three (3) independent directors appointed in line with the required qualifications stipulated;[9] Directors may not serve on the board of more than five (5) public companies at a time; disqualified directors now include directors that were removed from the Board;[10] and attendance of Board meetings is now a factor for re-election.[11] On its disclosure obligations, NNPCL is expected to ensure that information on the Memorandum and Articles of Association of the company is accessible to the public and potential investors. The shareholding structure[12], shareholders[13], authorized share capital, exact date of incorporation e.t.c all need to be fully disclosed to the public to ensure compliance with the provisions of the PIA and CAMA. Records of the minutes of the meeting where the first directors are appointed, board resolutions for the nomination of the Chairman e.t.c all need to be public knowledge to ensure complete transparency and fulfil all international best practice disclosure obligations.

Worthy of note is Section 60-63 of the PIA which attempts to cater for some corporate governance concerns of the new NNPCL. However, the provisions seem to be merely advisory and no liabilities are imposed for any failure to carry out such responsibilities. Thus, recourse is to be had to CAMA and its regulatory body, the Corporate Affairs Commission (CAC) for the enforcement of these provisions in addition to the provisions of CAMA.

On the whole and having considered some salient issues with respect to the new NNPCL, there are some who believe that the transformation of the NNPC into NNPCL is merely a name change and that there would be no material difference from the old structure especially as the NNPC has operated as a highly institutionalized corporation for the last 45 years. Whether they are right or wrong, only time will tell.

However, it is important to remain optimistic that with the right corporate administration, NNPCL can create an environment that would not only grow the country’s economy but also attract both local and foreign investment thereby making it a major player in the global energy market.