As the second-largest economy on the African continent and Germany’s number one trading partner in Africa, the South African renewable energy sector is increasingly brought to focus for German SMEs. Not only is the country blessed with abundance of renewable energy resources, but it is also regarded as an attractive location to do business as Africa’s most industrialised country with a highly developed financial and legal sector as well as modern infrastructure. South Africa has everything to become a trendsetter with a stable energy supply when it comes to alternative energy. 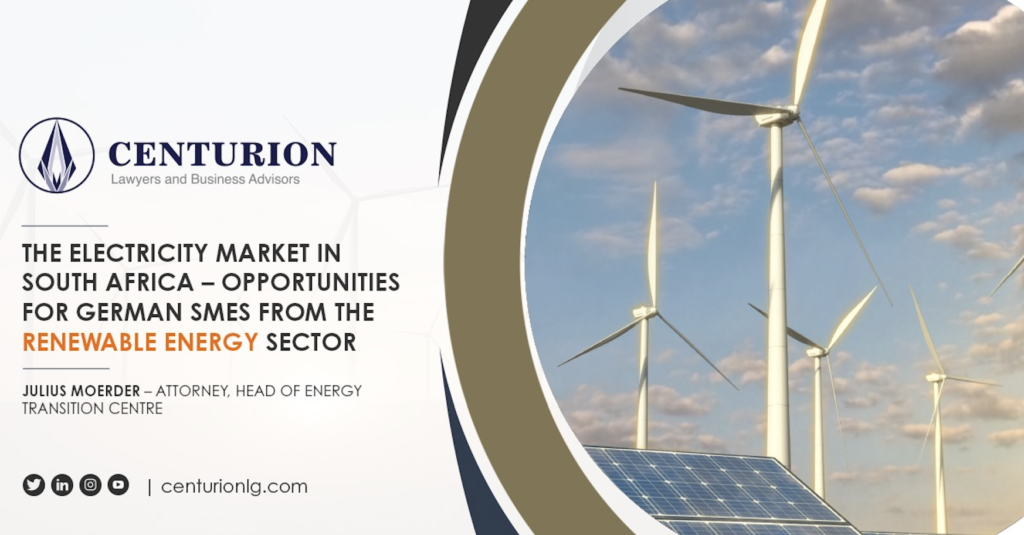 As the second-largest economy on the African continent and Germany’s number one trading partner in Africa, the South African renewable energy sector is increasingly brought to focus for German SMEs. Not only is the country blessed with abundance of renewable energy resources, but it is also regarded as an attractive location to do business as Africa’s most industrialised country with a highly developed financial and legal sector as well as modern infrastructure. South Africa has everything to become a trendsetter with a stable energy supply when it comes to alternative energy.

Despite the almost inexhaustible potential, the country still faces many challenges within its energy sector – ranging from the chronic power outages (“load shedding”), failure-prone and outdated infrastructure, lack of regular maintenance to its continuous heavy reliance on coal. Currently coal is the major energy source for South Africa, comprising more than 80% of the country’s energy mix. South Africa is the number one emitter of greenhouse gases (GHG) on the continent and ranks amongst the 20th largest worldwide (https://ourworldindata.org/co2/country/south-africa).

These issues, amongst Covid-19, have slowed down the commitment of many investors in South Africa. However, the country is taking notable steps addressing climate change. In 2019 the last Integrated Resources Plan (IRP) was adopted and proposes a significant shift away from coal and certain fossil fuels, towards gas and renewables. While coal would continue to play a role for decades, the plan would see no new plants built after 2030 and four-fifths of capacity closed by 2050 (http://www.energy.gov.za/IRP/2019/IRP-2019.pdf).

This article provides a brief overview of the most recent developments and legislative reforms in the South African electricity market and will look in the opportunities for German SMEs in the renewable energy sector.

The market for renewable energy in South Africa is generally developing very positively, although at a slower pace than it could. A milestone for the ramp up of renewable energy generation and its competitiveness in South Africa was the public tender program for renewable energy projects (“Renewable Energy Independent Power Production Procurement Program”), which was initially launched in 2011 with a three-year delay but is now entering into its sixth round in April 2022. The South African Renewable Energy Independent Power Producer Procurement Programme (REIPPPP) is a competitive tender process that was designed to facilitate private sector investment into grid-connected renewable energy generation in South Africa. Qualifying technologies are onshore wind, solar PV, solar thermal, biomass solid, biogas, landfill gas and (small) hydro plants.

Furthermore, the legal framework for self-generation and PPAs has been improved and amended over the past years. As South Africans are still facing increasing electricity prices and shortcomings in supply by the public power utility Eskom, the demand for renewable energy self-generation and small-scale off grid solutions is continuously increasing.

The utility Eskom is experiencing major financial problems, which the treasury has described as the single biggest risk to the South African economy. Eskom is responsible for 95% of electricity supply, operates the country’s grid and owns most of its coal-fired power plants. Cost and time overruns at two large coal plants it is building are a major cause of its financial problems.

On the back of these issues, businesses and private households are therefore looking for alternatives such as off-grid solutions for planning security. This was finally facilitated by an Amendment Bill of the Electricity Regulation Act (ERA) in 2019 by Mineral Resources and Energy minister Gwede Mantashe as it released the much-awaited exemption in raising the registration threshold for self-generation facilities from 1MW to 100MW. The Amendment Bill has unlocked significant opportunities for the private sector and facilitated additional generation capacity into the stressed South African grid. The amendment allows a generation facility including an Independent Power Producer (IPP) of up to 100MW, to sell electricity to “end-use customers” without a license provided that they have registered with NERSA.

Large industrial and mining companies are amongst the most important beneficiaries since it allows to purchase electricity from and IPP, covering the power needs within their groups and have the power transmitted through the grid to facilities throughout the country.

On 10 February 2022, the Minister of Mineral Resources and Energy published a second Amendment Bill to the Electricity Regulation Act for public comments. Focal points of these amendments are to shift from a predominantly single-buyer electricity market to a competitive multi-market structure. The envisaged amendments in the Bill are to promote a competitive market for electricity generation and the establishment of an independent state-owned transmission entity. This will have an impact on IPPs, funders, offtakers and consumers. The Department of Mineral Resources and Energy plans to introduce structural changes in South Africa’s electricity sector, separating all transmission-related activities from the distribution and generation functions of Eskom, the country’s state-owned public utility. It is understood that an independent state-owned transmission company would also be established.

To further boost industry competition, the Bill would permit market transactions, physical bilateral transactions and regulated transactions – a move away from the traditional vertically integrated model applied to Eskom. A ‘transmission system operator’ (TSO) will also be created to manage a competitive electricity trading platform, allowing buyers and sellers to trade with each other on an hourly and daily basis. While currently only operations activities are licensed, the Bill would also introduce a new category of license for the construction of generation facilities as well as distribution and transmission systems. As bottom line of the Bill, there will be three ways in which electricity can be traded (bought and sold), which will foster competition and, in the medium term, decrease electricity prices:

(1) through a trading platform on which market participants may trade with each other on an hourly and daily basis;

(2) licensed or registered generators may enter into power purchase arrangements with direct customers and traders; and

(3) regulated power purchase agreements by generators with the single buyer office of the TSO, or the buyers determined by the Minister.

Moreover, in February 2022 a new South African private electricity trading company has been granted a trading license by the National Energy Regulator of South Africa (Nersa). This license enables to source competitively priced, predominantly renewable power from multiple IPPs and small-scale generators, transport or ‘wheel’ this energy across the national and municipal grid networks and sell it to customers at a discount to prevailing electricity tariffs. The awarding of this license by Nersa represents a critical step forward unbundling of Eskom’s generation, transmission and distribution business units to enable the transition from a single-buyer model to a more competitive domestic open market model.

H2.SA will assess the potential of green hydrogen production in several locations, such as Boegoebaai, where Sasol is conducting a feasibility study to explore the potential of Boegoebaai as an export hub for green hydrogen and ammonia. Furthermore, the German government has made a separate commitment of €200 million (~R3.1 billion) of concessional finance for investments in the energy sector through its development bank KfW.

The electricity market is undergoing progressive liberalization, including the improvement of framework conditions, the establishment of new forms of power generation and distribution, and the growing presence of private-sector players in the market.

German renewable energy companies have already been playing an instrumental role in creating a sustainable energy infrastructure in South Africa and in ensuring a greater use of renewable energies, including energy efficiency technologies across the country. Such companies that are currently operating in South Africa often aim to expand their activities at a later stage from their South African base into the rest of the African energy market e.g., the neighbouring country Namibia.

Those recent developments and South Africa’s commitment to drive energy transition also offers great opportunities for German SMEs to enter the South African market, providing PV and energy storage systems and related technologies as well as suppliers of plant technology and machinery. In the field of renewable energy technology, South Africa is highly dependent on imports. This offers market opportunities for German renewable energy SMEs along the entire value chain.

Due to the continuously falling system costs and the relatively simple technical implementation, PV is the renewable energy technology with the widest distribution and strongest growth in the field of decentralized application in South Africa. There is also application potential for solar thermal, especially in the food and textile industries. With regards to hydrogen German companies have the chance to play a key role in international competition for the development and export of hydrogen and PtX technologies.

South Africa offers great potential for German SMEs to successfully participate in the growing market for decentralized renewable energy solutions in the country.