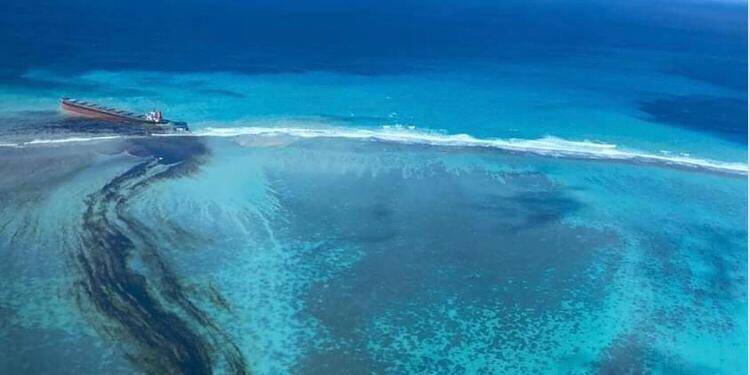 It has now been more than two weeks that the MV “Wakashio” from Japan has grounded and caused what could be the greatest oil spill disaster of the Mauritian history. The island, especially for the most affected zone, is well known for its blue lagoon as well as harbouring endemic species of animals, plants, coral atolls, set aside from human contact for their recovery. Now, with more than 1,000 of the 4,000 tons of heavy bunker fuel released in the water, the island may be facing irreversible consequences to its natural environment and biodiversity, and the economy will most certainly take a big hit, considering that island depends largely on the tourism sector as a main source of revenue.

Following the Prime Minister’s declaration of state of national emergency during which he said that Mauritius was not properly equipped to deal with en environmental disaster of this magnitude, countries around the world are rushing to extend their help. France, in accordance and support of the POLMAR Plan[1], has dispatched on Saturday 8th of August a military aircraft from the neighboring Reunion Island to make rotation over the contaminated area, with experts aboard and special equipment for pollution control. Additional support is also coming from India, providing technical support on the oil spill control and clean up. Other countries including the UK and the EU have expressed their readiness to offer necessary support when needed.

Oil spill incidents, whether on small or large scale, as we know, has potential negative effects on the maritime industry, shipping industries and seafood vendors overall. Both concerned parties, on a legal perspective, are to act upon this incident and find ways to solve the matter in the most diplomatic way, without further complications or constraints, bearing in mind that the situation is a critical one.

The UNCLOS is “a convention, with due regard for the sovereignty of all States, a legal order for the seas and oceans which will facilitate international communication, and will promote the peaceful uses of the seas and oceans, the equitable and efficient utilization of their resources, the conservation of their living resources, and the study, protection and preservation of the marine environment”. Under this set of regulations, in case of an incident at sea, the concerned parties have to “take all measures necessary to prevent, reduce, and control pollution of the marine environment from any source and to ensure that activities under their jurisdiction or control are conducted so as not to cause damage by pollution to other countries and their environment.” Mauritius, being the “victim” has an obligation to act upon and utilise its resources to tackle the matter.

The infected zone, due to the oil spill incident, is located in the EEZ, a “region beyond and adjacent to the territorial waters up to a distance of 200 nautical miles from the baseline”. As per the law and regulations, unless given rightful authorisation from the Prime Minister, no other person/party/country has the right to:

For any activities or operations to be carried out in these waters, an official and rightful authorisation has to be issued by the Mauritian Government. The local government has legal rights to oversee any activities conducted at the underwater cultural heritage in its EEZ or continental shelf to prevent infringement of local legislation. “It is therefore, the responsibility of every nation to protect and preserve the underwater cultural heritage (Maritime Zones Act 2005)”. In regards to the “Wakashio” oil spill incident, the concerned party, Mitsui OSK Lines, owner of the ship, finds itself infringing the established regulations, even if access to foreign ship are allowed. In this case, the oil spill incident has caused damaged to the Mauritian properties and a protected coastal zone. As per the law, “any person who contravenes the Act and regulations made shall commit an offence and shall be liable in the case of a body corporate, to a fine not exceeding 150,000,000 rupees (Maritime Zones Act 2005).As a result, Mauritius is in its rightful place to demand for compensations to help and resolve this incident.

Mauritius’ Prime Minister, Pravind Jugnauth, has declared a “state of emergency” on the 7th of August. As per the government’s statement, all necessary actions to contain the oil are being taken. In addition to the local support, the Government has called for international support, for assistance, equipment and experts in oil spilling disasters to respond to the crisis.

The government has designated local NGO “Eco Sud” and the “Ciel Group”, along with the help of volunteers from across the island to act upon the disaster. The main initiative is to contain the oil and secure the sensitive areas; sea booms/containment barriers are being fashioned from unused garments, “bagasse” (sugar cane and other plants remains) and even human hair, then deployed to contain the oil, on a scale of 10km. Donations and contributions are also being collected throughout the island whether in terms of money donations and garments. Even local hairdressers and barbers are voluntarily collecting hair from clients to be used in the making of the sea booms. As such, we can say that the Mauritian population is determined to overcome this problem as quickly and smoothly as possible.

In response to this major incident, the owner of the Japanese ship, Akihiko Ono, the head of Mitsui OSK Lines, has apologized and openly presented their excuses to the country. Along with the Japanese Ministry of Foreign affairs, a disaster-relief team will be brought up and deployed in Mauritius. Being deployed on Monday 10th of August, the six-man team will be working with the local authorities, assisting them with the oil draining processes and any other required demands.

As previously mentioned, Mauritius may be facing its most disastrous oil spillage incident since many years now. The country’s economy is already suffering from the COVID-19 shut-down and the Government is still working on ways to stabilise the economy. Adding the “Wakashio” incident to this list, the economy is in line of suffering damages that may cause even more serious consequences, bringing the country to a state of unrest. It is of the utmost priority that the government tackles this matter as soon as possible and redirect funds towards saving the affected coasts of the island instead of massively investing in low priority projects; in comparison to this incident. Priorities are to be set in order or else the country will most probably witness a total breakdown of its economy and lose international links and relationships to other countries.