He hails from Mbea Nsomo (Micomiseng district) in Equatorial Guinea, where he is one of the first lawyers in his village. 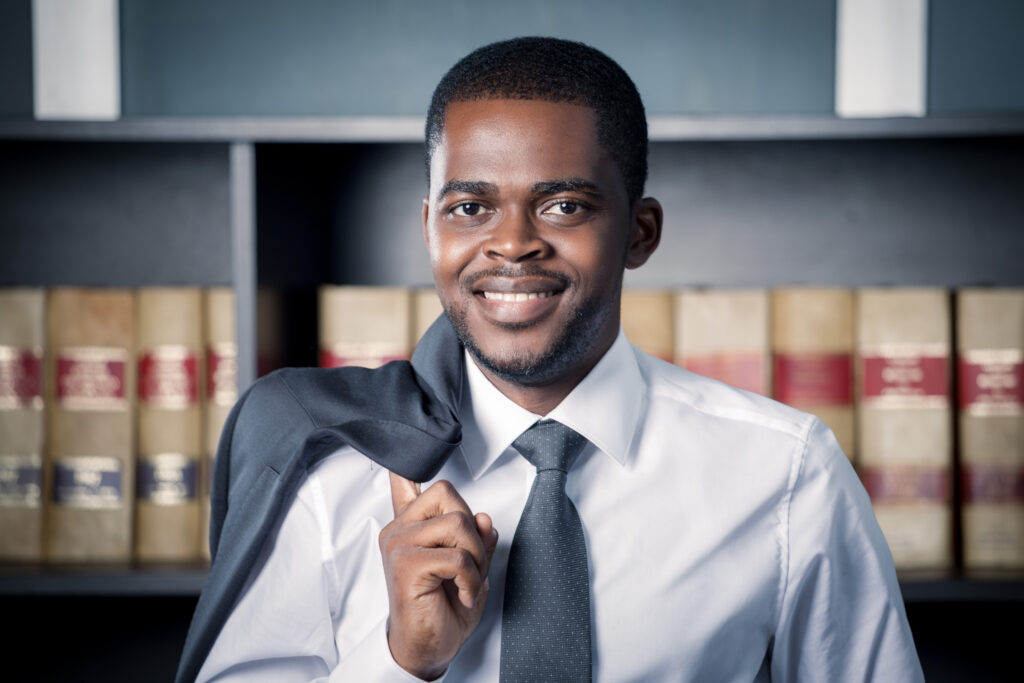 He hails from Mbea Nsomo (Micomiseng district) in Equatorial Guinea, where he is one of the first lawyers in his village.

He has significant experience in negotiation of conflicts and contracts; commercial business consulting and regulatory compliance.

We asked Pablo a few questions to get to know him.

Before you entered law school you were a teacher?

Yes, I taught young children  between the ages of 5 and 11, and coordinated other teachers. I learn a lot from young children: their simplicity, lack of resentment and happiness are an encouragement to me. The teaching profession is one of the most noble callings in life. Actually, being a teacher and practicing law in an African country is not very different.

You have to adopt the same communication strategies to reach clients, because the legal language is very complicated to understand for most of our people and a majority of those people are very simple people. We still have to reach them with strategies that no law school offers you.

I also didn’t have a very pleasant childhood, so in part, it was also a very personal commitment.  I want to defend people. The Law offers you many tools to do that, in different ways.

The first thing I did when I returned to the country from the United Stated (where I also voluntarily taught Spanish to Latin American kids who were born in the States) was to visit my former students. I never lost contact with them.

I must confess that I am a research fan. I did the Masters to fulfil a dream I had when I was a child – solving difficult crimes and catching the bad guys (laughs). I have already begun to apply that knowledge to study facts that happened in my country in the past, such as the death of the heroes that fought for our independence. I’m also working on a book that aims to offer advice on how to work a crime scene taking into account the culture of my country. Sometimes in a community the people to first arrive at a possible crime scene come in and pollute it. When the police arrive, the work gets complicated because basically every one could be interrogated because their prints will appear on the scene.

That was my main motivation, but you can’t believe what I discovered; A large part of a lawyer’s job is research. Sometimes you must think like a criminalist to contrast doubtful authentic evidence or to find certain information you need to build a case. It does not have to be only a criminal case, in an environment where you don’t have Westlaw or Lexis Nexis those abilities can help. So I think that criminalistics and the practice of law in some ways complement each other at least in the way you can use them to solve cases.

What are the top two techniques you find useful in mediating or negotiating oil and gas contracts?

More than techniques, I would like to reduce them into principles. Please don’t go into a negotiation with invariable techniques; go with principles; this is my philosophy.

Mediating and negotiating may sometimes require a very different approach. But both try to achieve the same and that should never be forgotten. The goal is for both parties to be happy with the agreement. It is very important and there are many things you can do to achieve that; but if I had to pick two they would be:

For me, it is more important to adopt a position that tends to maintain a good commercial relationship between the parties. It makes no sense to get an agreement and not be able to execute it or have to go to court to execute it.

You follow American Jurisprudence. Care to expand on that?

I love the American system. Human beings like to have control, and that happens when you can predict the outcome of a given situation. Basically that is the reason why we have laws almost about anything you can imagine. If you look at what the American system calls “case law” you will realize that when a case creates a precedent, similar cases will follow the same rule of law.

For example, after Lucy vs. Zehmer, all cases of contracts in the United States took the same approach, we can say the same with Roe vs. Wade or Garrat vs. Dailey.

I always like to take advantage of things others do well. I use a lot what they call “elemental analysis” it’s like a mathematical operation. Breaking a case into pieces and analysing whether it meets certain elements without any emotion or consideration being involved. In our system (continental) we do something similar but you will see that the rule of law is not always the same for similar cases, because the logic of our system is that a small circumstances can make two facts different so a different rule of law can be applicable.

I really enjoy the American system, it’s not as boring as ours. They cite living cases, we cite dead laws. (Please do not say this to the guys of the congress).

2020 is a big year for Equatorial Guinea. What plans does Centurion have for new business?

At Centurion, we are always prepared. We like action. After the success of the “Year of energy 2019,” the country is preparing for the year of investment in oil, gas, and mining. During the year of energy, we saw a great interest of Chinese companies and recently several agreements have been signed with Russian companies, adding this to those already operating in the country. This is a new challenge for Centurion.

I don’t want to show off but no law firm better understands the oil & gas sector like we do and none other has the capacity to create connections, multicultural team of lawyers that can treat a Chinese, Russian or American client in their own language or that can put a new investor in more than ten African countries in a matter of hours.

We are working in many especial legal services for them.  If you go to Equatorial Guinea to do business in oil & Gas, believe me, you need Centurion Law Group and for us, it is a great responsibility and  we have an agenda for everyone.

What is unique about the E.G market

On the one hand I would like to start with a phrase of Dr. Malik “God puts resources on your hand, but how you take advantage of them is your business”. And on the other, I love geopolitics because it helps us predict the future of countries and regions and it never fails.

Equatorial Guinea has the highest density of people with the name ‘Obama’ per kilometre square meter (laughs). There are two unique things about Equatorial Guinea; first, the language which means a very different culture and secondly, its geographical position.

If you open Google earth and look at the map of Africa, you can find Bioko (the capital) in the Gulf of Guinea; the most important interior island of the Gulf of Guinea. But it is not the island or its beauty what I’m referring to. Expand your view and you will see that you have between 2, 3 and 4 hours the largest capitals of sub-Saharan Africa: Douala, Lagos, Port Novo, Lomé, Accra etc. If you develop the right financial services and fiscal policies with the same quality investors can find in Hong Kong or Luxembourg, you can have all the businessmen and women who invest not only in these nearby markets but in all of Africa in a quiet, beautiful place, with good weather and incredible people. That is possible and I can tell you it will be the future.

About the language, I know other Africans love Spanish and want to learn it. We have to make an effort to expand the language – this is an open invitation for everyone to come to Equatorial Guinea and learn. On the other hand, on the other side of the Atlantic, we have countries (Latin America) that are also under development but have more advanced economies than ours and you cannot believe how they react when they discover that there is a country in Africa where people speaks Spanish. Everyone literally wants to come and explore opportunities across the continent; but they need a house where they can feel at home.  I know because I have many Latin friends. It is a matter of time that we are able to connect both markets and do something incredible and Equatorial Guinea is the right place where that should happen. So that’s why we are special, but the more special you are the more responsibility you have and I think we are aware of it more and more.

What have been your three most influential projects to work in at Centurion?

I think this is the most difficult to answer. If we have something in Centurion, it is very big cases and projects.

The three that I have had the greatest impact on and those I have enjoyed are:

1. Compliance with local content without any doubt. We assist the government of Equatorial Guinea as external consultants to audit oil and gas companies.  This was my motivation because it had a very strong social component. You know that you work on something that will help things to be done well because if those things are done well, many people will benefit.

2. My first non-collaborative negotiation. I can’t forget when my colleague and I stayed in the office until midnight to negotiate an agreement with government officials, that was sent personally by the Minister of [omitted]. We represented the company. We almost had the agreement from 8:00 p.m, but because of a liability clause, we arrived until 12:00 without an agreement yet. It was a very hard negotiation. However, we managed to protect the interests of our client, fortunately, everything went well.

3. The last one is harder for me to decide. The client demanded a lot of money from the government and wanted an opinion on the dispute resolution clauses in the contracts.  Unfortunately, only one contract of three included an arbitration clause; the other two were subject to local legislation, so we found it smarter for the client to negotiate a solution because generally the Government of Equatorial Guinea always pays its debts. We knew that both parties did not want a dispute and this is a good example of what I said before about the negotiations.

Centurion is proud to have a team of lawyers that understand Africa, and have been educated in the best Law facilities, internationally. Set up an appointment with one of our lawyers, today. We are happy to engage with you on our flexible cross-border business & energy law services! Send us an email on info@centurionlg.com or call us on +27 11 245 5900.