Big Barrels author NJ Ayuk, founder and CEO of Centurion Law Group, is an authority on the energy business and enterprise in Africa today. 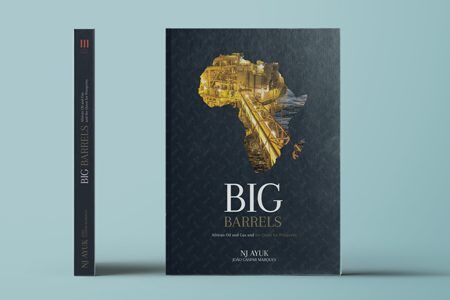 As an exemplary African entrepreneur, NJ Ayuk has intimately witnessed the transformative impact of the oil and gas industry on the continent, being an active player in building countries, shaping economies and its societies. The launch of, Big Barrels: African Oil and Gas and the Quest for Prosperity, co-written with João Marques, is long awaited; confronting the misinterpreted view that energy-rich countries undeniably suffer from and often victimized by the effects of the ‘resource curse’. The reality, the book argues, could not be further from it.

Big Barrels reads in the introduction: “The evidence makes it clear that the responsible and sustainable development of these resources is not only possible, but may be the quickest and most effective route to peace and prosperity for many of these nations. The question of how this can be done is central to this book.” Through nine chapters detailing case studies of what countries like Gabon, Ghana, Nigeria and Tanzania have done right, readers gain an alternative view of how developing petroleum resources positively impacts the continent.

Big Barrels lends a silver lining on Africa’s petroleum sector and how their fates are inextricably linked. Mr. Ayuk and Mr. Marques emerge through this powerful depiction as a seminal voice for how Africa charters its course and manages its natural resources. Mr. Ayuk, the founder and CEO of the pan-African Centurion Law Group and an outspoken champion of African entrepreneurship and leadership, describes the need to change the narrative on energy in Africa. “The simple fact is oil and gas provide African countries with the fastest route to prosperity,” he says, “Natural resources are a pedestal for building nations, building economies and building wealth.”

He added: “In 2017, we are forging our own ways of winning in this complex industry. Africa is not just a source of raw materials for the world. This book demonstrates the Why and How true value of oil and gas in Africa is a source of innovation and wealth (job) creation.”

Among the nine examples in the book, Big Barrels describes the rapid development of Equatorial Guinea from one of the world’s economic backwaters to a leading light in Central Africa; how Ghana turned to its active civic society to deal with its oil windfall only a few years ago; and how Tanzania is being shaped in response to global interest in its massive gas reserves.

Big Barrels: African Oil and Gas and the Quest for Prosperity will officially launch at the Africa Oil & Power (www.africaoilandpower.com) conference in Cape Town on June 5-7, 2017. The book can be pre-ordered on Amazon for delivery after May 31, 2017. Limited editions signed by the author will be available at the event.

About NJ Ayuk:
A leading energy lawyer and a strong advocate for African entrepreneurs, NJ Ayuk is recognized as one of the foremost figures in African business today. A Global Shaper with the World Economic Forum, one of Forbes’ Top 10 Most Influential Men in Africa in 2015, and a well-known dealmaker in the petroleum and power sectors, NJ has dedicated his career to helping entrepreneurs find success and to building the careers of young African lawyers. As founder and CEO of Centurion Law Group, a pan-African law firm, NJ strives through his work to ensure that business, and especially oil and gas, impacts African societies in a positive way. NJ graduated from University of Maryland College Park and earned a Juris Doctor from William Mitchell College of Law and an MBA from the New York Institute of Technology.

About João Marques:
Energy analyst and editor João Marques is a seasoned Africa specialist with in-the-field reporting experience from Africa’s petroleum hotspots. Now based in Lisbon, Portugal, João writes for numerous international publications and websites on issues of energy, policy and economics. In recent years he has published oil and gas industry reports on Gabon, Angola, Tanzania, Uganda, Madagascar, São Tomé and Principe, and South Africa, covering the full spectrum of Africa’s petroleum markets from frontier exploration to trading and petrochemicals. João holds an Erasmus Mundus Double Master of Arts degree in Journalism and Media within Globalisation.